A Man of Many Words

This track was recorded in Criteria Studios in Miami, Florida in October 1970, just as Derek & the Dominos were finishing work on Layla & Other Assorted Love Songs. Three of the Dominos--Carl Radle, Eric Clapton, and Jim Gordon--play on this track, while Dr. John adds piano. Clapton plays on most of the songs on the album, but "A Man of Many Words" is the only one to feature Radle.

This is a simple song with a fun groove. The 2-measure riff heard in the intro utilizes syncopation over a bVII – IV – I chord progression (also known as a “double plagal progression”). Radle plays the same lick every time this riff is heard, with the only variant being an eighth note F or D on beat 2 of the first measure of the pattern (compare measures 1, 3, and 19 in the full transcription).

On the verses, Radle maintains a lightly syncopated feel with another 2-measure pattern. The first measure is relatively sparse, but the staccato quarter note followed by a dotted half gives it a nice bounce. In the second measure of the verse Radle provides a little eighth note syncopation, ascending from scale degrees 3 to 4 to 5.

The bass line for the entire verse is based on this 2-measure pattern. Radle plays it four times over the G chord, transposing the second measure down an octave on the second and fourth repeats. He then transposes it down a perfect 4th to D when the chord changes (m. 15).

The core of the song is over in about a minute. The next nearly 3 minutes is just a vamp on the intro groove. As we have come to expect from him, Radle sticks to his basic pattern, varying it only slightly on occasion.

A full transcription of the bass line is below. 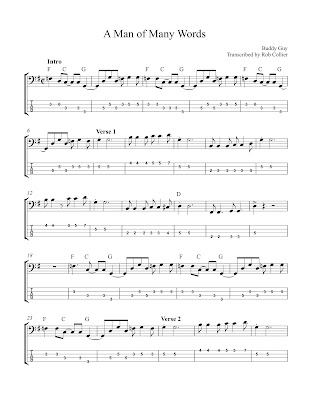 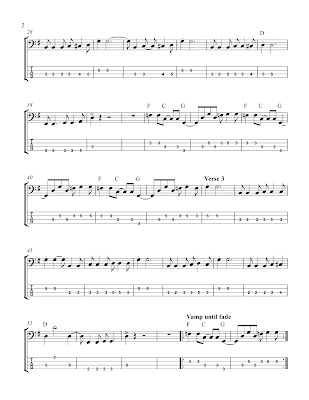