“Don’t Know Why” is another song that came from the fruitful months of collaboration between Eric Clapton and Delaney Bramlett, from the fall of 1969 through the spring of 1970. Bramlett was a huge influence on Clapton, and helped him gain confidence in his singing and songwriting. This is mostly a Delaney Bramlett song. In a 1970 interview with Melody Maker Magazine, Clapton said, “it was an idea Delaney had when he came to England, and we finished it while he was staying at my house.” It’s essentially a gospel ballad, the type of song Bramlett could write in his sleep.

Radle’s bass line leaves plenty of space, but still moves around enough to keep things interesting. Had this song ended up on a Clapton album in the later ‘70s, Radle likely would have played a simpler, stricter line, probably closer to the style of “Wonderful Tonight.”

The verses and choruses feature very similar grooves. Radle uses the pattern below often, with only occasional variation of it.

The song builds in intensity to the final chorus and outro, which is just a two-measure tag repeated multiple times before fading. This outro is one of the funnest parts of the song to play. On the C and Bb chords, Radle plays the roots embellished with upper neighbor tones. Then on the F chord, he ascends through two octaves of an F pentatonic scale. 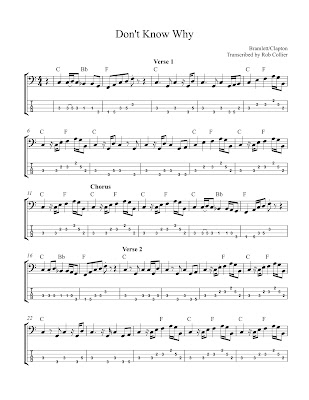 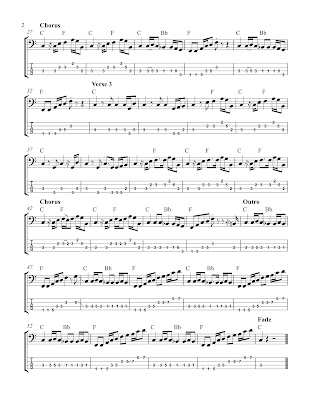