Like “Coming Home” from Delaney & Bonnie and Friends On Tour with Eric Clapton,
“Let It Rain” is credited to Eric Clapton and Bonnie Bramlett, but it was almost certainly a collaboration between Clapton and Delaney. Delaney was at the top of his game in the late 1960s and early 1970s, and as Bobby Whitlock said, “everyone wanted a piece of what Delaney had.” And it seems Delaney was willing to spread it around, giving away songwriting credits, among other things.


“Let It Rain” is the last song on Clapton’s first solo album. Carl Radle plays bass on every track on the album, and turns in a masterful effort on this classic. For the verses and choruses, he has a pretty concrete skeleton of a line that he sticks to, but he continually improvises around it. Radle’s concept for the line is to hit the root of the chord then walk up or down, diatonically or chromatically, to the root of the next chord. (“Diatonic” means notes within the key. “Chromatic,” generally, means notes outside of the key. In this case, a chromatic walk-up or –down means moving in half-steps regardless of the key.)

Radle approaches much of the song this way. Even when the chord progression changes for the guitar solo, he keeps this idea of approaching the root of each chord via a chromatic walk-up or walk-down.

In playing a melodic bass line—rather than just playing chord roots, or a repetitive riff/pattern that gets transposed up and down the neck—we essentially have two options: play a line based on the scale (diatonic or chromatic) or play a line based on arpeggios (root, 3rd, 5th, 7th, etc.). Often a line will be some combination of the two. Much of the bass line for this song utilizes the scale. Radle doesn’t explore arpeggios much until the outro (mm. 89 to the end). At this point, the line becomes almost exclusively arpeggio patterns. Or, more precisely, it makes use of major pentatonic scales, which are root-2nd-3rd-5th-6th. You can think of the pentatonic scale as a major scale without the 4th and 7th, or as a major arpeggio plus a 2nd and 6th above the root. In this way, a pentatonic scale is somewhere in between a diatonic scale and an arpeggio. In the example below, I have labeled each note of the scale, with the 2nd and  6th in parentheses to show they are members of the pentatonic scale, but outside of the arpeggio. 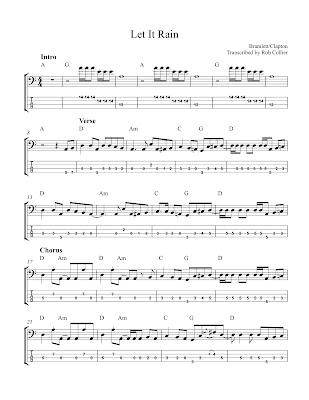 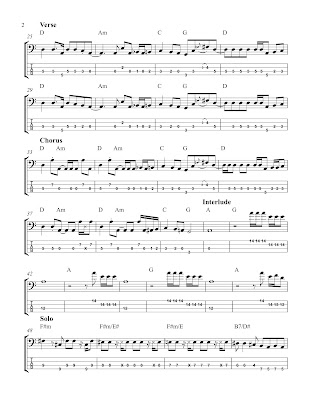 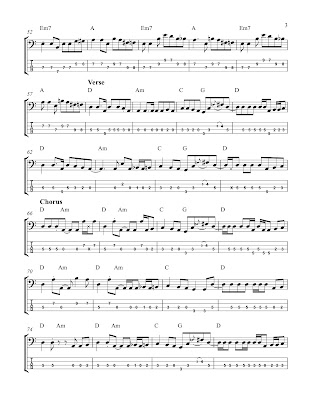 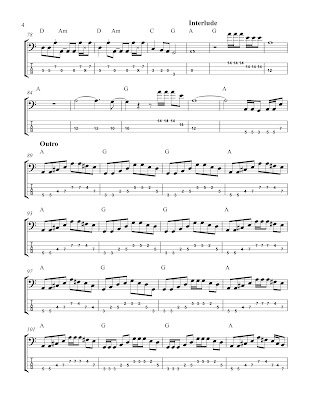 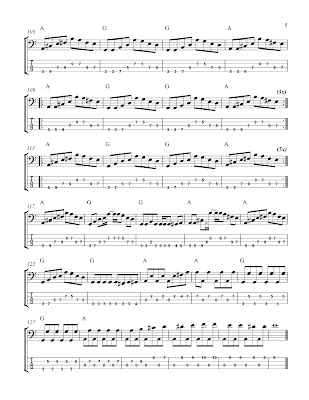